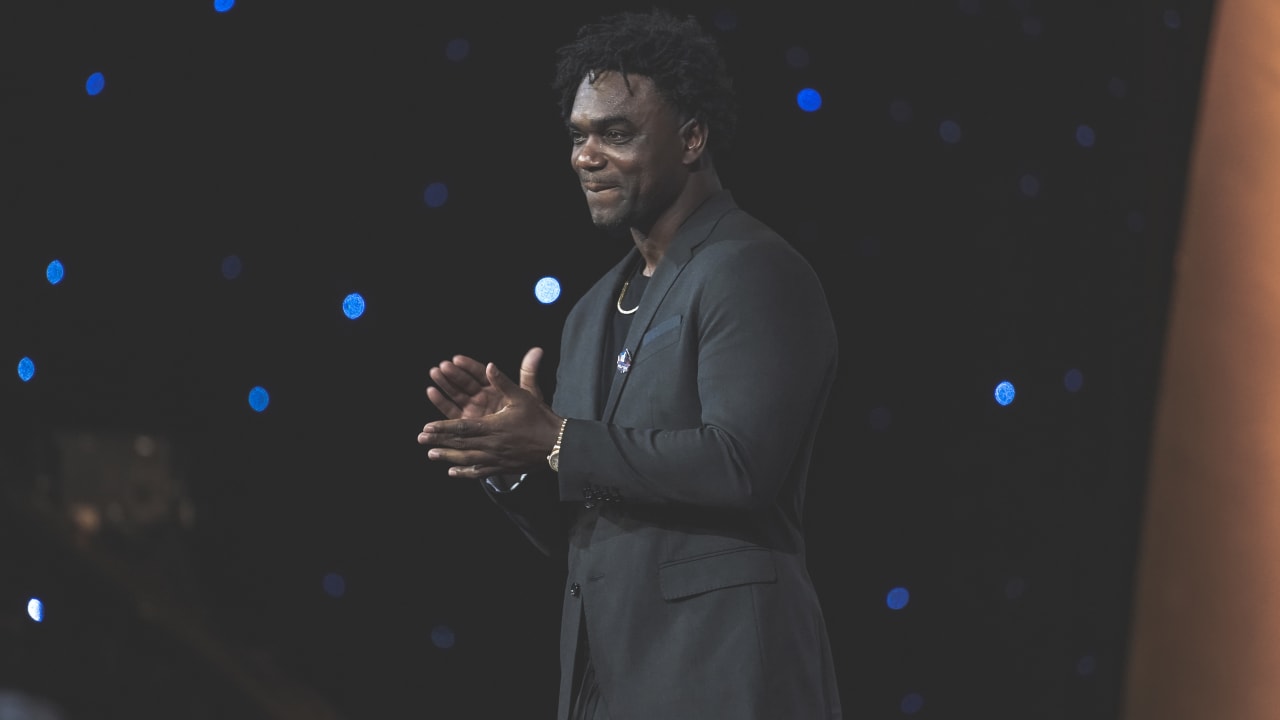 Jim Irsay, of course, was in on the secret.

And after three quarterbacks went off the board with the first three picks of the 1999 NFL Draft, the secret was out.

With the fourth-overall pick, the Indianapolis Colts selected Edgerrin James, running back, University of Miami.

The Colts shocked the NFL world by picking James over Heisman Trophy winner Ricky Williams. A few minutes later, an incredulous New Orleans Saints, who were sure Williams was headed to Indy, traded the farm to the Washington Redskins to acquire the fifth-overall pick and nabbed the University of Texas running back.

Williams would go on to have a solid NFL career, but James would prove to be one of the best running backs in league history — a fact solidified on Saturday, when James was named one of five Modern Era inductees for the Pro Football Hall of Fame’s Class of 2020.

James might’ve had to wait a bit — he was a Hall of Fame finalist this year for the fourth time in five years — but he was all smiles on Saturday night.

“It means everything to me to be sitting here,” James said during a Saturday news conference in Miami, where the PFHOF Class of 2020 was unveiled during the annual NFL Honors program. “After I’ve been through the process for years … you just have to be patient. The work is done, it’s just a matter of time. It’s one of those things you can’t be too high to too low about, and when your number is called you get to be right here where we are today.”

From the very start of his professional career, James showed just how special of talent he could be. In his rookie season in 1999, he was instrumental in helping flip the Colts’ record from 3-13 the previous season to 13-3, as he claimed league Offensive Rookie of the Year honors, as well as the league’s rushing title, with 369 rushing attempts for 1,553 yards and 13 touchdowns; he also added an impressive 62 receptions for 586 yards and four scores through the air.

In 2000, James set the bar even higher, becoming just the third player since the 1970 NFL-AFL merger to lead the league in rushing in each of his first two seasons after compiling 387 rushing attempts for 1,709 yards and another 13 touchdowns, while also adding 63 receptions for 594 yards and another five receiving TDs.

James was off to an even better start the following season in 2001 before suffering torn left ACL in the Colts’ sixth game of the year. He would return to post three more 1,000-yard rushing seasons — including two more 1,500-yard efforts — over his final four years in Indy and finish as the franchise’s all-time leader in rushing yards (9,226), rushing touchdowns (64), rushing yards per game average (96.1), rushing yards in a single season (1,709 in 2000) and most seasons with 1,000 rushing yards (five).

Echoing the sentiments of Hall of Fame head coach Tony Dungy and quarterback Peyton Manning, Irsay on Saturday heaped praise on James not just for his ability to get rushing yards in large chunks, but for his contributions in the passing game as both a receiver and a blocker.

“I mean, he was just magic,” Irsay told Colts.com. “So strong. Just could change direction on a dime. Would block. Unselfish. Just everything in a Colt you’re looking for.”

Irsay was part of a very exclusive group of top Colts decision makers — general manager Bill Polian and head coach Jim Mora also among them — that knew James, and not Williams, would be Colts’ pick at No. 4 overall heading into that 1999 NFL Draft.

And, just like when the team selected Peyton Manning No. 1 overall over Ryan Leaf just one year prior, the Colts were proven absolutely right by taking James, who would go on to be selected to four Pro Bowls and be named to the 2000s NFL All-Decade Team.

“People were shocked that we took him,” Irsay recalled. “And there was another back there and some other things that they thought we should’ve reached for. But that’s what happens when you have multiple Hall of Famers — they bounce off each other. And Bill is a Hall of Famer, and therefore here comes Edgerrin as a Hall of Famer, because he could just see how good he was.”

It was Irsay that called James on Saturday to deliver the news that he had finally been selected for induction into the Hall of Fame. In the 10-minute conversation that would follow, James would ask Irsay if he would do him the honor of presenting him at this year’s enshrinement ceremony, which is being held Saturday, Aug. 8, in Canton, Ohio.

Irsay also presented James’ teammate, wide receiver Marvin Harrison, when he was inducted into the Pro Football Hall of Fame in 2016.

“You know what? Owners really live for moments like that. It was really special,” Irsay said. “It’s just a tremendous honor and I’m humbled by the fact that he asked me. Truly humbled. And I’ll be really excited about goofing around and hanging around and having fun with Edge for a couple days there that weekend, with the parade and stuff.

“He is as tough as you get, and he is extremely charismatic, and I consider him just one of my best friends on the planet,” Irsay continued. “I love him. I just love him, and I know our fans do, too.”