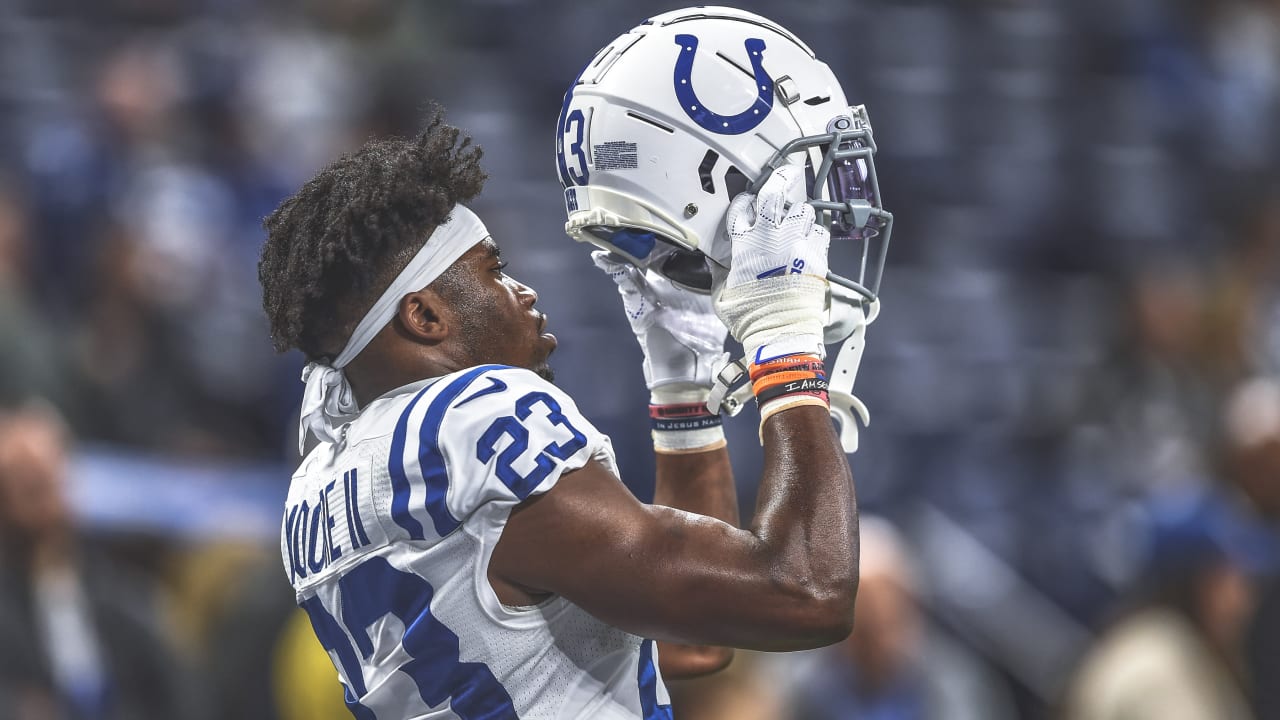 On if he’s been able to take some time away from football after the end of the season:

Moore II: “I used most of January to do that. I went back home and settled down, had fun with my family, talked with them a lot. Because during the season you get so far away from communicating with family and worrying about yourself and worrying about being the best player that you can be and best person that you can be away from home, and you kind of forget about family. So we just use this offseason to try to be intentional as much as we can with the people that have supported us our entire life, and just showing them that I appreciate (them) for letting me be who I am during the season so that we can have a good time out of season. And my family understands that, and I appreciate them for that.”

On how he was able to get ready for the season with a club/cast on his hand:

Moore II: “I think everything starts mentally, and with Day 1 from practicing against Cleveland, I thought I jammed my finger, and then a week later it’s the same and it’s swollen and it hasn’t gotten any progress. So we went and got an MRI, we were like, ‘Ah — we really need surgery,’ so we did that, what, two weeks before Week 1 even started, so two weeks into the season I had to play with a cast. So putting that cast on, it hurt me — it really did hurt me, because I had planned on having a tremendous season, you know, and having that cast on was pretty frustrating. I didn’t like the curve that I started on Week 1 of the 2019 season.”

On what specifically he works on to become such an effective corner in the slot and outside:

On his close relationship with Mason, who has been battling cancer at Riley Children’s Hospital:

Moore II: “He just really seems like a little brother to me. I met him November 30 of ’18 — I met him at the Riley Hospital, and one visit turned into a relationship. You know, God put people in your life for a reason, for a purpose, and I think that purpose was to show him that he is a kid. He knows what he’s going through, he knows what cancer is and he knows that the other kids are different from him health-wise, and he knows why he has to miss school sometimes. But I try to make him feel like a kid as much as I can, like a son as much as I can, like a brother as much as I can, ’cause he’s surrounded by some great people. But that relationship that we have is indescribable, man. … He’s surrounded by great people, not just me. He has a great support system and he has a lot of people rooting for him and that are in his corner.”

On where he gets his sense of being a positive influence in the community:

Moore II: “Man, just feel like everybody has a goal that they wanna reach, everybody has a certain figure that they wanna be in life, and growing up, I only really seen great things on TV. So going through college I got a passion for football and I wanted to be a football player; at the same time, every quarter they would make us go to a middle school or an elementary and read a book or just hang out with the kids, and I really felt like I was enjoying that more than just being on the field. Football was one thing, but helping children and helping people in need, just being there for them and making them smile whenever you leave, from the different circumstances that they come from, that was more fulfilling. And I just feel like that grew over time, man. Going to church every Sunday with my family, we were always helping out at the soup kitchen or giving back some how — some way, some how. And it always left me with a great feeling, so I feel like that’s where it started at … it starts in the home and it led to church and it led throughout the schools.”

On the frustration of missing the final four games of the 2019 season with an ankle injury:

Moore II: “I mean, it was tough for me to watch. Hurt or not, every guy wants to be in the game, so I couldn’t help the team as much as I (wanted), but it was a learning point for this season because I had never been hurt, especially hurt that much. But I had to transfer my mind to helping guys mentally and vocally of trying to be the best player that they could be, so it’s just not me being out there, it’s me trying to help a guy play to the best of their abilities — trying to help them find their strengths and their positives for them to win a game. So it was, it was very frustrating missing, what, five games, and then not finishing, what, two games. It really hurt not just me, but the team, but I’m putting ’19 in ’19 and I’m focusing on ’20.”

On his mindset after going undrafted and then being cut by the New England Patriots just before the start of his rookie year:

Moore II: “So being in New England, I realized that I could play in this league. And being cut and having a guaranteed practice squad, I was like, ‘Ah, that’s not good enough. That’s not good enough. I’m way better than that.’ So I was on the phone with my mom right after I got cut, because, I don’t know, I feel like that was the first time in my life that I felt rejected and I just wasn’t good enough to be who I wanted to be, and she was always like, ‘Just be positive, because at least you could be there tomorrow. At least you don’t have to come back home to Georgia, and then you’re going to be filled up with question marks. At least you know where tomorrow sits.’ So the next day came, and she told me that I was going to Indianapolis, and I was like, ‘Am I going to the practice squad, or am I going to (the active roster)?’ And she was like, ‘No, you’re on the team now.’ So that was a relief.”

On what he saw out of rookie cornerbacks Rock Ya-Sin and Marvell Tell III in 2019:

Moore II: “I think first thing first, as a player you’ve just got to have a want-to, and all those guys have a want-to. And I would say everybody in the locker room has a want-to of trying to be the best player that they can be, and just help this team win at the best of their ability. And then, just talking to them, they’re young players, so they’re really trying to figure out who they are, what can they give to the game, what they bring to the table, what are their positives, what don’t they do as good as they want to do, and then just figuring it out. That’s just how it is, and you’ve got to let a young player flourish, let them make mistakes, because if he’s a competitive guy then he’ll learn from it. So over time we’ll see what type of player they really are as far as wanting to compete and being coachable.”