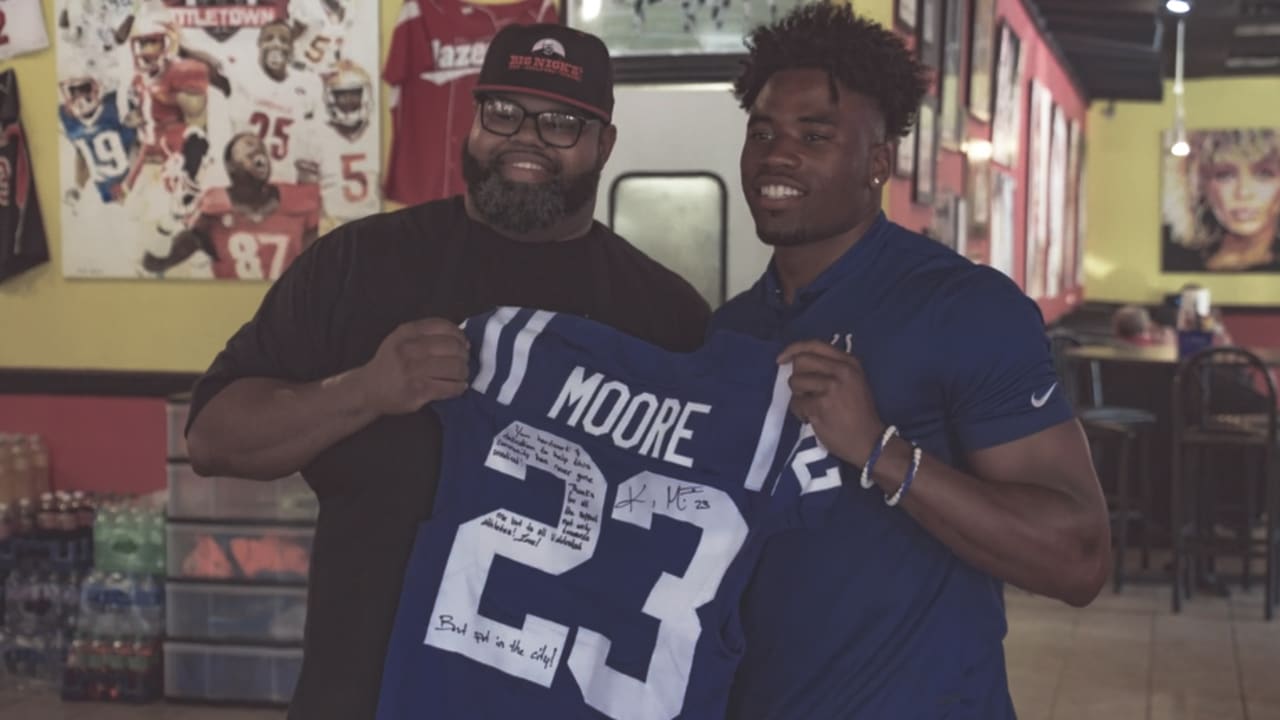 Here are some highlights:

» We take you to Moore II’s hometown of Valdosta, Ga., where he cherishes the opportunity to “lay low a little bit and just catch up with the people that I used to talk to all the time.” Among those featured in this episode include his mother, his high school football coach, Randy McPherson, and Nick Harden, who owns the local “Big Nick’s” restaurant.

» The episode really starts out with a big family dinner, which is Moore II’s comfort zone. After all, his upbringing included one point where he was living in a two-bedroom house with his mother, grandfather, grandmother and six other kids. “And it was tough,” Moore II recalled. “I didn’t really think about the conditions that we were going through at the time, but as I got older and looked back and reminisce on my childhood, it’s crazy to even think that 10 of us was in the house, and seven of us were children — and five of us were sleeping in the living room.”

» His mom, Angela, said her biggest fear was that little Kenny would get caught up with the wrong crowd growing up, so she did everything she could to get him into all sorts of activities. He played baseball, basketball and ran track, but especially remembers her young son’s excitement when she told him she had signed him up for a local Pop Warner football league. “I said, ‘Kenny, guess what?’ And he always had this smile — ‘What momma; what?’ I said, ‘I signed you up for football.’ Oh my God, he was _so_ happy. He said, ‘’Well, when do I start?’ I said, ‘We go today.’”

» After hearing this story, perhaps it’s no surprise that Moore II’s mother has always been his hero and inspiration. “If anybody knows my mom, they know how hard-working she was and (how) devoted she was to her family, and how loving she was to her kids and her family. That was always my why, just to do it for my mom,” Moore II said. “They used to always say in school, like, ‘Who’s your hero? Who do you look up to?’ And everybody would always say, like, entertainers in the world and comedians and stuff like that, but my mom was my hero going through school. And if I could do it for anybody growing up, it was always my mom.”

» By the time Moore II got to middle school, he certainly wasn’t the biggest kid on the football field. In fact, McPherson recalled, he was actually the smallest kid — which caught his eye. “You know, I knew he was coming to the high school and I knew he was an athlete,” McPherson recalled. “Now, just because he was the smallest guy out here, he stuck out — his speed, his want-to, you know, he was hittin’.”

» “My first time meeting Coach McPherson was seventh or eighth grade,” Moore II said. “He had come out to the middle school while we were practicing — you know, just to scout. He said, ‘Son, let me tell you something.’ I said, ‘Yes sir?’ He say, ‘Go home and eat the whole entire fridge.’ And said, ‘What?’ And we just started laughing, and that was the spark of our relationship.”

» By the time Moore II got to high school, those traits — the speed, the attitude, the hitting ability — made perfect sense at cornerback, despite the fact Moore II initially thought he’d be a star receiver. “I knew you were gonna be a corner,” McPherson tells Moore II as they walk onto his high school field. “I mean, we might’ve played around with receiver, but I seen the basketball court, you was on your man the whole way down. … Always had the right stance, you know?”

» McPherson says Moore II now serves as the perfect inspiration for kids that come up through his program now that might not be the biggest, fastest or strongest. “t’s been a real joy, you know, to see Kenny come from that day of seventh grade spring practice to today. It’s really a remarkable story. You know, I’ve never seen a kid come as far, from one spot to now, as Kenny Moore — as a man and as a football player.”

» Moore II then heads to “Big Nick’s” restaurant, where he’s dropping off a signed Colts jersey — and, of course, grabbing something to eat. *CAUTION: The following scenes will make your mouth water and your stomach rumble. Plan accordingly*

» Moore II says he likes to give out his jerseys around town “to show my appreciation to people that have inspired me to do better for this community.” He tells Harden: “We’re hanging up some jerseys in the city. And this is just for all your dedication and your hard work that you put into your craft and businesses, and just giving back what you have to the city. You’re like a big bro to all of us in the city that wanna own something or want to do something great in the city, and you were the first to do it.”

» Finally, ride shotgun with Moore II as he hosts his “DAY OF 1OVE” free football camp. Lots of current and former players utilize camps to give back, but to Moore II, it means more than that. “What I owe back to this community is a role model, you know, for kids to look up to,” he said. “And I just wanna share the story of, football doesn’t define me; it’s just something that I do. And I’m gonna just use this platform to give back to others and the youth.”

» Moore II’s mother has a little advice to wrap things up: “(If) your child tell you that they’re gonna be a golf player or an NFL or basketball player, you have to believe in that child,” she said. “If that child has that belief that’s in their heart, mind and soul, you never know.

“Sometimes I forget that he plays in the NFL, you know? But to see this, something that he wants to do to give back to Valdosta, his community, and the love that people have shown, it’s awesome. It’s really awesome. I just thank God for it every day.””

Tags: Episode he II Kenny moore Recap she was