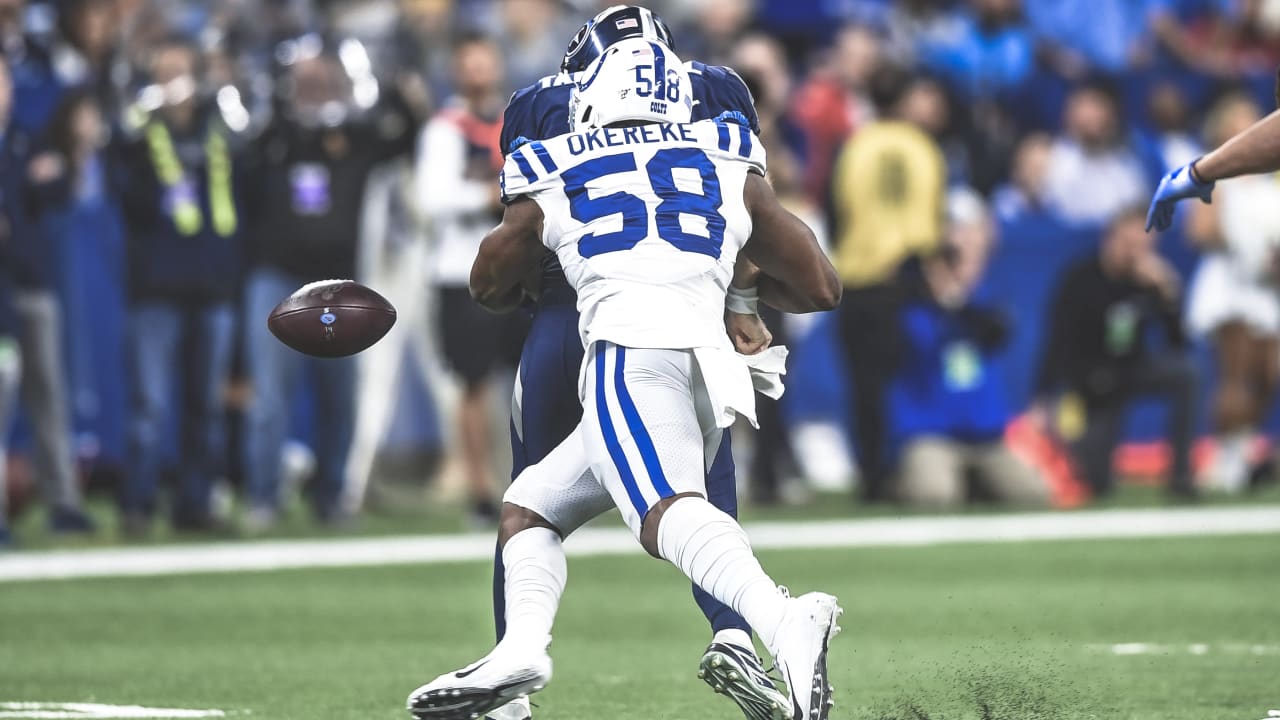 » E.J. Speed, linebacker: Speed, the Colts’ fifth-round (164th-overall) selection in the 2019 NFL Draft, logged 13 snaps, all on special teams, in last Sunday’s loss to the Titans, including four on the kick coverage, six on the kick return and three on the punt return units. For the season, Speed has played 157 total snaps — 33 on defense and 124 on special teams — and has collected six total tackles (one for a loss) and one special teams stop.

» Marvell Tell III, cornerback: Tell III, the Colts’ fifth-round (144th-overall) selection in the 2019 NFL Draft, played in his ninth game of the season last Sunday against the Titans, logging 17 snaps on the day, all on special teams (six on kick return, four each on kick coverage and punt return and three on the field goal/extra point block units). For the season, Tell III has logged 348 snaps — including 218 on defense and 130 on special teams — and has logged 19 tackles, five passes defensed and one special teams stop, while his one forced fumble ranks tied for sixth among all NFL rookies.

» Khari Willis, safety: Willis, the Colts’ fourth-round (109th-overall) selection in the 2019 NFL Draft, earned his sixth start of the season last Sunday against the Titans, logging 45 total snaps, all on defense, and collecting three total tackles. For the year, Willis has played 514 total snaps (174 at safety, 156 in the box, 60 each along the defensive line and at slot corner and nine out wide; as well as 55 on special teams), and he ranks eighth among all NFL rookies in total tackles (47) and tied for seventh in solo tackles (36), while his four quarterback hurries ranks tied for 10th among all safeties, according to Pro Football Focus; he also has two tackles for loss and a pass defensed on the year.

» Rock Ya-Sin, cornerback: Ya-Sin, the Colts’ second-round (34th-overall) selection in the 2019 NFL Draft, earned his ninth start of the season last Sunday against the Titans, finishing with one tackle on the afternoon; he played 47 snaps in all, including 43 on defense and four on special teams. Ya-Sin, who has logged a Colts rookie-high 692 total snaps on the year — 570 on defense and 122 on special teams — ranks tied for sixth among all NFL rookies in interceptions (1) and seventh among all rookies in solo tackles (36); he has 41 total tackles on the year (one for a loss), three passes defensed and one special teams stop.